(For voyage and event details/schedule and full menu, click on icon above.)

(Sae Hrafn under sail at sunset

Then come sail and row with us, and understand how it was done 1000 years ago

(Sae Hrafn under oars on the lower Potomac

The Longship Company, Ltd. is a non-profit educational organization devoted to increasing understanding and knowledge of the life, culture, technology, commerce, and exploration of the early northern European seafarers and those with whom they came into contact. (We  are an all volunteer organization -- the "Company" in our name refers to a ship's company of its officers and crew.)

(Sae Hrafn with crew in period clothing, under oars in fog on a marshy creek inlet off of the Potomac River 2016)

Central to the activities of the Longship Company are authentic reconstructions of Viking era ships.  The  Sae Hrafn (Sea Raven), is a 39' (12m) class A (Div. II) tall ship which is based on similarly sized coastal raiding and defense vessels (i.e. Skuldelev V & Ralswiek/Rugen II ), with the sweeping lines of the classic longships. She was launched in September 2005. The Sae Hrafn replaced the Fyrdraca  ( Fire Drake), a lap-strake, 32' (10m) class A (Div II) tall ship based on a  9th century warship excavated in Germany, which had been the organization's primary vessel for nearly 25 years before she was retired. The other vessel currently in use is the Gyrfalcon - so named for the hunting falcons of the far northern regions. It is based on the small,  21' (6.5m), faring boat found in the Gokstad Viking ship burial, and serves primarily as a teaching tool easily transportable overland for exhibits, educational demonstrations, and historical reenactments. Although these reconstructions are based on Scandinavian archaeological finds, most of their basic elements are common to ships of other cultures of the era, spanning across Europe from the Celts in the West to the Slavs in the East, with nautical and other cross-cultural contacts and influences having extended even to the Middle East and North Africa. In addition to the activities of sailing, maintaining, and exhibiting/demonstrating the vessels,  the Longship Company participates in living history events,  contributes to ongoing international archaeology-by-experiment efforts relative to early seafaring and technology, produces educational materials, and supports artistic and scholarly efforts related to the Vikings and their era. In the manner of a Scandinavian smorgasbord-style feast, Longship Company members can partake of all those activities, or pick and choose among them.

(Local college students aboard the Sae Hrafn examining a Viking navigation device for maintaining course on a line of latitude, one of
several reconstructed by Longship Company members based on archaeological finds from and the Baltic area)

(Sae Hrafn under sail on a tributary of the Potomac River)

In recent years the organization has taken part in an international gathering of replica and reconstruction Viking ships at the Norse archaeological site at L'Anse aux Meadows, Newfoundland,  participated in several parades of tall ships in the harbors of the Mid-Atlantic region, served as consultants to the Smithsonian Institution  and the New York Museum of Natural History,  provided a Viking  exhibition for the Norwegian Embassy in Washington, DC,  presented lectures at the Calvert Marine Museumand other regional venues; and produced a video adaptation of the medieval poetic account of the Battle of Maldon. Pushing a bit beyond both ends of what is usually considered the classic Viking age, for filming of a History Channel program, "Quest for King Arthur",  on the historical basis of, and the later romantic legends about, King Arthur, the Fyrdraca underwent a temporary makeover to become a 6th century Saxon ship. Later, converted back to its more usual appearance, the Fyrdraca became a funerary ship for the Arthur of legends of later medieval times in which the three mysterious women carried his body off to Avalon, in some stunning sunset shots, others of which were used to depict the flight of Celts to Brittany. Even further beyond the Viking age, a few of our members and the Gyrfalcon portrayed the reputed landing of the 1398 Sinclair/Zeno expedition in Nova Scotia,  for History Channel programs on the Templars and early Freemasons -- the Scottish craft in use as ships' boats and general rowboats in that era having been influenced by, and almost identical to, Norse boats such as the Gyrfalcon.

Some of the members of the organization have attended courses at the in   on the history, operation, and preservation of single-square-sail ships. Other members have contributed articles on various aspects of Norse history and technology, as well as the Longship Company's efforts to increase understanding of medieval sailing vessels, to journals and magazines around the world. Members' photos of our vessels have been used to illustrate books published in the US and other countries on historical subjects as well as modern efforts to understand sailing in that era. Closer to home, some of those involved pursue traditional techniques and/or styles of blacksmithing, woodworking, textile arts, etc., and lend their expertise in these areas to the activities of the Longship Company. (A few of our members have also been seen explaining and demonstrating early blacksmithing and wood working tools and techniques in the History Channel's "Tool Box" series segments.)  In any given week some members may be lecturing at a school, museum, or cultural festival; others attending a scholarly conference on historical subjects or taking an advanced Coast Guard boating course; and others taking part in living history reenactments -- providing a continual two way flow of knowledge from and to the organization. Yet like the independent, free-spirited seafarers of old, this diverse group still manages to work together as a team in the formidable tasks of keeping traditional-style wooden vessels in seaworthy condition -- and in experiencing the unique thrill of moving such ships gracefully across the water by oars and sail in the same manner as would have been done 1000 years ago.

(Sae Hrafn under oars, with full historical rigging and reenactor crew, at dusk as the moon rises over

It  is impossible to come away from even the briefest voyage on a reconstruction of a ship of the era without a sense of connection to, and a much greater appreciation for, those medieval seafarers who ventured out  in such vessels. Although operating primarily on the relatively sheltered waters of the lower Patuxent and rivers and Chesapeake Bay, Longship Company vessels and their crews experience many of the same challenges and maritime hazards encountered by those who traveled in such ships in the Viking age. Even when the weather is fair and the winds favorable, sailing a longship is always a learning experience. In less ideal circumstances, such as making slow progress rowing into a freezing headwind after having had to chip ice off the ship, it is an extraordinary education in the realities of medieval life and seafaring. Our usual voyage, however, is a casual afternoon out on the water, often pursuing knowledge through archaeology-by-experiment, refining our sailing skills, enjoying nature, getting a rowing workout far better and infinitely more interesting than any obtained in a gym, and experiencing something few people alive today ever have. In any event, whether out on a voyage or maintaining the vessels, there is usually no lack of exercise for one's mind and body, nor any shortage of hard working companions with an incredibly broad array of interests, skills, and knowledge.

The Longship Company, Ltd. is incorporated as a not-for-profit organization in the state of Maryland and is run by a Board of Trustees. It has 501(c)(3) status, meaning  that donations to the Longship Company are tax deductible under regulations regarding donations to tax-exempt non-profit organizations.  The Longship Company began in 1979, branching off from Markland, a Maryland re-enactment group. However, in subsequent decades as the Longship Company grew and evolved, it attracted members with a wide range of interests in, and approaches to, the various aspects of early European history, and particularly to the operation of oared and square-rigged ships of the period. The majority of members are from , , and , with additional members from the adjoining states, as well as a few in other locales as distant as , , , and Hampshire, England. 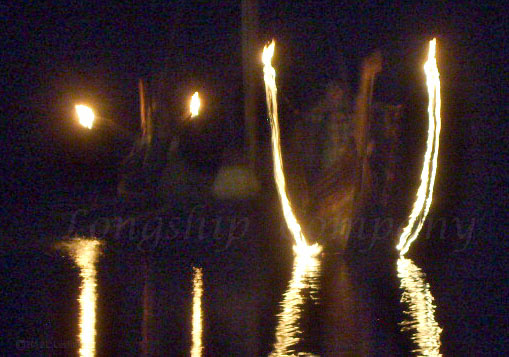 The Sae Hrafn:
After the longest Viking longship portage in history -- from Inyokern, California to her new home in southern Maryland, an overland journey of nearly 3000 miles -- the Sae Hrafn underwent some additional work, and was launched under oars on September 12, 2005.  She was found to be as swift as she looks, with stability even better than expected. She was first rigged for sail in  2006, and  we continued to be delighted with her handling and performance during the 2006 through 2018 sailing seasons. All along, we have been making modifications, adjustments, and repairs to the ship and related equipment; a continuous learning and fine-tuning process that leads to safer, more efficient, pleasurable and educational voyaging. She is now back in the water for the 2019 sailing season, for which we have some intriguing voyages and activities planned - and those will be all the more interesting and fun if you take part in them with us.

For further information about the Longship Company, the schedule of voyages and events, how to arrange to come on a voyage as a guest, how to become a member, more pictures, information on the ships, sailing, navigation, clothing, tools, etc. choose from the following menu:

Want a Viking ship of your own?

Or if you don't have room for one in your garage, perhaps you'd like a smaller item of wood artistry of the Viking age?

The builder of the Sae Hrafn is an artist and craftsman working primarily in wood, and specializing in reproductions of items from the Viking era.  Further information can be found at  RAVENKRAFT.COM

Your support is needed
The educational mission of the Longship Company is one which requires many different resources. The Longship Company is an all volunteer organization with no paid employees. Unlike similar organizations maintaining authentic reconstructions of historical ships which generally have budgets of at least many tens, and more often hundreds, of thousands of dollars from government or foundation sources, we rely primarily on the resources of our members, the occasional payments for special event participations and appearances, and donations from the public. Some of our members contribute large amounts of their time as well as money to the acquisition, maintenance, and operation of our vessels. A number of the members also continually make their property, vehicles, tools, historical accessories, and similar personal possessions available for the work of the organization. While we usually manage to make financial ends meet, support from the public is critical to our ablity to function efficiently, and to further our efforts to preserve and increase knowledge of medieval life and seafaring.

Financial donations can be made by credit card or PayPal account, via PayPal - just click on the "Donate" button

If you can help with a donation of  machinery or tools useful in maintaining wooden vessels, a portable generator, materials such as suitable lumber, large heavy duty tarps, property/use of a dock/slip and/or shore property on the Patuxent or Potomac or Bay, indoor space where we can work on the ship over the winter, or if you wish to make a financial donation by check, please contact us.

Contact us to make a donation    Donations to the Longship Company are tax deductible.